Al-Chwarizmi, the Arabian mathematician of 9th century which gave this world the term Algorithm; which is sequence of defined steps which is used to complete a task and its applications can be seen from real human lives to complex computer programs. The real power of the social media giants and search engine providers lies in their ability to interpret the mass data behind which are running large and complex algorithms. It's not just some algorithm but it's a science because the masses in question here are very large and complex. They are flickering continuously, never stable therefore don’t have any defined structure and patters. The real trick is to read and interpret their data which often exists in more than one form and have no structure to itself either.

Before data analytics companies were hoping ad searching for competitive advantages and then come the Big Data and while they were working with the big data technology exploded which in turn affected their strategies, products and processes by completely changing their processing speed and storage capacity. But working with big data only is not the answer; only companies dealing with big data intelligently will succeed in the market and will be successful.
The change does not stopped with the data analytics and new technology (hardware) but constantly data scientists are developing the new algorithms which offers new ways to analyze and interpret the data but all this will succeed in the company if management understands the essence of making necessary internal adjustments and changes in the structure. 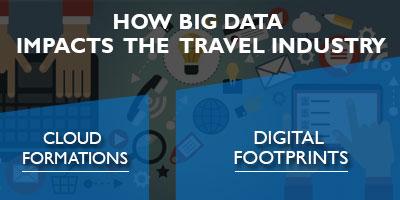 Business travellers are leaving digital footprints more than ever. They travel globally with their mobile devices and are constantly active on social media. These footprints are available before, during and after the trip and can be in any form They can be alphanumerical bits containing information about the purchase or they can be pictures and videos or some of their loyalty scheme habit.
It is not an exaggeration to say that no other industry comes close in knowing their customer like the travel industry do and now this information can be stored as well and it is the marketing department which makes use of these pieces of bits and information which are stored rather than coordinating with the customers.

This large unsorted data is then mixed with other data such as weather, health risks and more and it then dumped in the clouds which are gigantic storage complexes built for this purpose only.
Data security, safety and privacy are also very relevant here. If a traveller wants to benefit from the big data then he must very actively decide which information he would like to make public and this must be done several times during the day; though there is very little choice in the matter but still his input is valuable and necessary and he must whenever the option is available.
Big Data has arrived in the travel industry but the travel industry needs time in order to adjust this new technological change in his domain.