Mobile App Development: User-Experience Rules Not to be Ignored

Mobile apps have not only become powerful but they are also very important when it comes to gaining easy access to the users in the local, national and international market. As an entrepreneur, you can no longer neglect the importance of having an app which is not only loaded with features providing amazing user experiences but also have an amazing and intuitive UI. UI and UX are two vital things which cannot be ignored when it comes to developing mobile app and entrepreneur and users cannot afford to ignore this. However, it is also important to understand the target market before you go ahead with the plan of app development. No matter how much time you spend in developing your app it is important to have an intuitive UI failure to which can affect the credibility of the app big time. The so called "bad user experience" can also be the result of "bad UI design" and is not necessarily due to bad functionality. These are the steps necessary to keep in mind prior to developing mobile app as this approach will help you in designing better user experience. Following are few design tips which highlight the most important things to consider when one is going for a mobile app development.

Design of responsive UI is vital

When you are designing the UI for a mobile app, then you should keep in mind that the app interface is usable on wide variety devices, screens and operating systems. Whether you have to tweak Java Script or CSS media queries a special attention must be given to adaptability feature of the app so that it can work perfectly on variety of devices.

As a mobile app designer, it is very useful to iterate the interface design option so that apps are fully engaged in retaining the attention of targeted users. Each iteration comes with valuable lessons which can be learned and then can be re-applied to your next design project. 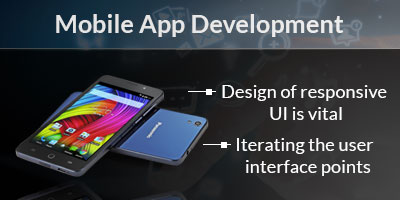 It is very common to take security and 508-compliance for accessibility into account during the later stage of mobile app development process, which results in increased project execution time. As a UI designing professional it is important to consult with the back-end team and middle ware expert in order to ensure that data which is being put forth is right and is in appropriate manner. Designing effective UI means reduction in the learning curve for the app users which also mean increasing the user’s overall productivity.

A good UI is simple which attracts the users

Now a days word ‘simple’ has become synonymous with the minimal design. Sometimes simple means this but it also means that users can pick the app, open it and start using it without having to go through detailed instructions or guides. A simple app means that almost all users can use the app with same productivity.

If you are a UI designer then it best to involve real users when evaluating a different UI design idea and gather opinion from them. Adopting this process at an early stage will help in reducing the chances of confusion when deciding which feature to keep ad which one to let go. By doing this the need for re-working will be minimized which will help in saving the time and money on the project.

The look of user interface depends on market you are about to target and by adhering to simple guidelines one can create a user interface which is easy to understand and which is user friendly.