Google Pigeon: Nomenclature by Search Engine Land: Google Pigeon is a name given by “Search Engine Land” to the Google local search algorithm update. Google has not shared any details or name of this update. So, search engine land gave it a name to reference it with more clarity. They named it so as this is a local search update and pigeons have a tendency to fly back home. 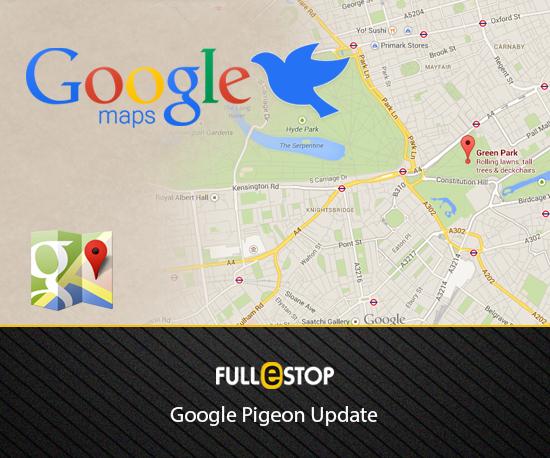 This new algorithm has been released to provide more accurate and useful local search results that are tied closely to the existing web search ranking signals and search features like Knowledge Graph, synonyms, spelling rectification etc. The changes are already visible in the Google Maps and Google Web search results.

Although the actual changes are not disclosed by Google, it does affect the local search results rankings and web site referrals of local businesses. Also, this update improves distance and location ranking parameters. The new algorithm is currently rolling out for US English local search results and it’s hard to predict when it would affect other countries and languages too.

Google has not disclosed any data on the percentage of queries affected by this algorithm update, nor if any web spam algorithms were also included in this update.

Pigeon is acting as a lucky mascot for local directory sites by providing them a better visibility in Google’s search results. To be more specific, it seems like Google has solved its Yelp problem, meaning the Yelp pages are now popping up at the top of search results when the word “Yelp” is included in the query itself.

Yelp recently accused Google for manipulating the search results and showing its own local listings, reviews and Google+ page ahead of Yelp pages even though users specifically included “Yelp” in their search query. Yelp’s report specifically showed the search results for Gary Danko, a restaurant in San Francisco. It clarified how the search term, “gary danko yelp”, resulted in the official website being listed on the top, along with links to Google reviews and Google+ page, instead of the yelp results, in spite of user specifically searching for yelp.

This problem is resolved now and the Yelp page for this restaurant is showing up at first spot when the query includes Yelp, including two other Yelp URLs showing up ahead of the official website. In fact, the results are visible on searches for other restaurants as well.

The effect is not limited to yelp; it goes on to other directories too. A search for “san francisco restaurants” shows well-known directory sites like Yelp, Trip Advisor, Open Table, Zagat etc. There were also results from San Francisco newspapers on page one, including SF Chronicle and SF Gate. An article from The Guardian- “Top 10 restaurants in San Francisco”- was also coming up on page one. No results from individual restaurants came up on the first page.

Similar results can be seen for other searches, but not all, as given below:

Hence, it is quite evident that Yelp and other local directory sites are getting directly benefited by Pigeon Update. And this actually makes sense since Google said that the update ties local results more closely to web ranking signals. Popular directory websites like Yelp and Trip Advisor are strongly benefited as these sites that have stronger SEO signals than small and individual restaurants and hotels websites. Hence, local search has gotten more difficult for such businesses.

As such, the update is quite big but the complaints are quite low as compared to other Google Updates like Panda or Penguin.