Is E-Commerce The Death of Retail?

Ecommerce has emerged as the fastest growing sector in India despite the India's economic slowdown. Over the past few years ecommerce players like Flipkart, Myntra, Jabong have grown not step by step but by leaps and have overcome the revenues of the physical retailers. This boom is so great that it even forced the brick and mortar retailers to go online. 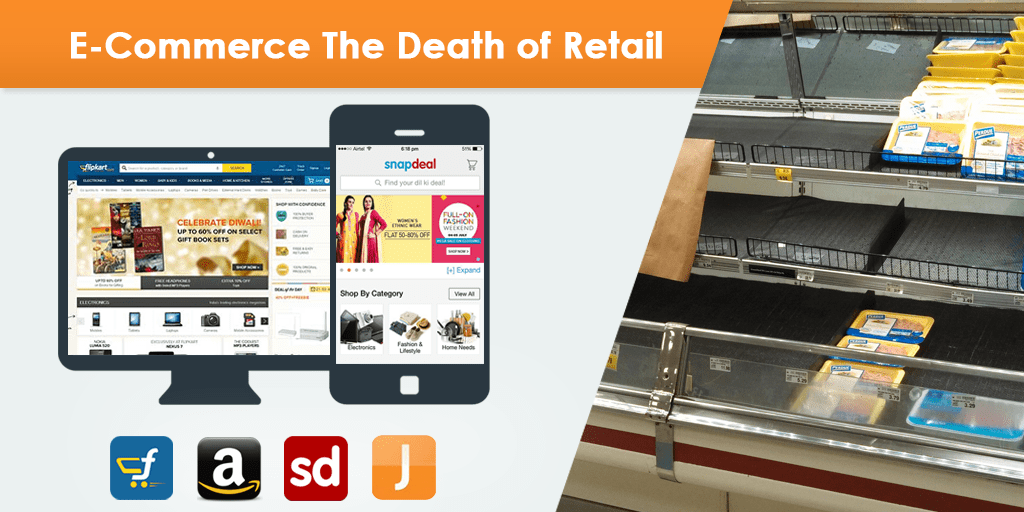 These ecommerce players are playing heavily on the discounts and by conducting shopping festivals. The sale on these e-stores is throughout the year.
This shows that the retail market in India is in trouble but the ground reality is totally different. Indian ecommerce market is around USD 2.3 billion and this is less than 1 percent of the total retail market.
The interesting point is that even retailers think the ecommerce is continuously eating their business and giants like Alibaba and Amazon are the hot topics of their discussion.
If we keep the numbers aside then it would be very interesting to know how much of this hype is actually true After all, Apple is still the most valuable company selling most of its products through the brick and mortar store as compared to its online store.

To understand the happenings of the ecommerce space we have to go back to the source to understand its evolution and what the differences are in India. If we take the look at the ecommerce evolution in China and US and compare it with the Indian scenario the story is quite different.

Government played key role in both US and China to promote the growth of the ecommerce. For almost 10 years ecommerce players in US did not have to pay the sales tax on their product and services which was the huge advantage for players like Amazon and Alibaba has no foreign competition in China. Such explosive head start was responsible for the retail stores.

In all ecommerce players did not have to buy customers buy giving huge discounts. They get the advantage of the natural price and the customers were hooked. But, in India they have to offer the huge price discounts to attract the attention of the customer. So will customers still prefer the ecommerce even after all the discounts are gone? This, only time can tell.

All retailers in India presume that the high rental costs of ecommerce companies are offering them the advantage over the physical retailers. Though, it is true but only partly. This high rental cost is replaced by the high IT, logistics and warehousing costs. Additional costs involved marketing and promotion.

Also, the huge success of the online stores is due to mobiles, books, music and consumer-electronics. Though these categories were able to give boom to ecommerce but are not able to generate the margins and it is evident from the focus on apparels and other high margin categories by the ecommerce players that they are looking for the profitable growth.

Traditional retailers in developed nations are adopting the multi-channel strategy which is proving quite successful while the proportion of this strategy is lower in developing countries but eventually the same trend will follow in them as well.

While the shoppers are moving online this is a huge opportunity for the physical retailers. Online players are creating the buzz and physical retailers have to ride this wave which is simply having a good Omni-channel strategy and if they fail in doing this then they have no one but themselves to blame.