Reasons Why your Followers May Un-follow you on Twitter

Building dedicated audience on social media is not a child's play and once you have done it don’t celebrate because this wasn’t even the hard part. The hard part is to keep them once they have begun to follow you. Especially on Twitter, where posts are small it is even harder and becomes a challenge. Like follow, a single click on the button is all it takes to un-follow and you may find yourself running out followers for an action you never intended to commit. Apart from this there are also random departures which are basically due to swings in mood but most other departures have clear reason for the action which means that it can be prevented. If you want your followers to follow your brand then below are some reasons due to which they may decide to un-follow you later. Take care of them.

You are not regular

There is no rule for regarding the number of posts on twitter but given that is a fast platform if you don’t post enough people are going to abandon you for someone else in your field. Except from starters you should make it a habit to post more than once in a single day. This is an essential strategy to keep the followers interested.

You are more than regular

It is also possible to get stuck on other pole too. People like to have very steady updates on their feeds. It is good to post several times during the entire day but to bombard your followers with the posts is not a good idea because this way their fees will be filled from your posts only and they will began to rule you out from the list.

Don’t only paste promotions such as sales

Twitter is an effective tool to generate leads but its purpose is more than that. If you are only there for the promotion then you will find yourself running out of followers because they will think that you are only here for profit instead of making some connections. So, socialize if you want them to follow you and hope to build a great base.

Your rhythm is good but you style and never changes. No matter when you post it all looks the same. This is the reason why people stop responding to them and slowly and slowly they will began to walk away.

In other case you have lots of things to share but they all sound exactly same. There is no innovation in your sharing. Similar headlines will going make it boring for the user and they will stop reading and sharing those things and then they will began to un-follow you because no matter what you share it all looks the same. 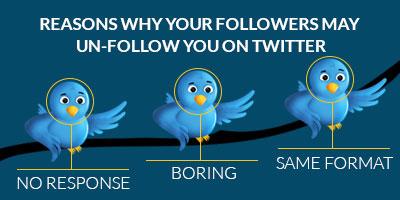 You seem like an interesting guy and have good posts to post. People want to interact with you but it turn out you are not responding to them. Keep this habit up and after sometime you will be looking for new followers. Respond to them and thanks them for contacting you and showing interest in you. When people contact you they are genuinely interested in you.

Everything is right about you; your posts, frequency, regularity etc. but what you are saying, does it actually matter? Your posts must be targeted to your specific audience and make sure that you are posting something that is valuable not just some average everyday info.
Try to avoid these mistakes and if you already are making them then improving them will lead to you to your success on twitter.