In simple words a design is way to get your message across your costumers. But sometimes we hear designers complaining about the design stating the client is asking to do the impossible and have ruined the whole design by including the impossible limitations and difficult to include elements. But as a web designer, it is our business to design what our client seeks and about all those limitations, things like this happens all the time and if current client is not doing then somebody else will.

See the design from other end of the line

In many cases the requests are not as odd as they appear, it just that most requirements are lost in translation. Think of a company executive trying to explain the design in designer’s language. It can totally go in different direction. May the client is asking just the normal thing but the way he explains makes it difficult to understand and then even hard to code and design. It’s like a tug-of-war between the client and the designer. Both are standing in opposite direction trying to pull the same rope in opposite direction.

No matter the client as a designer it is our moral duty to guide the project to a successful conclusion where we convert the client’s request into successful running website. Also, we have to accept that sometimes a non-creative person can see things which we designers even fail to notice. As far as limits are concerned the client understands much better its own brand and for what it stands. Over exposure can really be bad sometimes.

As a designer if you can understand the challenge of the client’s wish and look at it from a unique opportunity point of view then you already are a good designer. 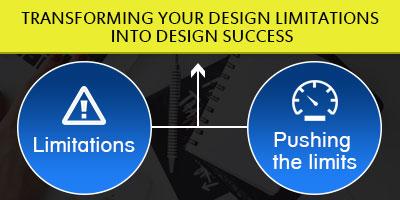 The important thing is not that how wild your imagination can run without boundaries but how wild it can be when limitations are given. How creative can you get in a confined space with limited resources!

Once you have understood all your limits there actually are no limitations left to be concerned and still you job remains the same that to come up with the best possible solution under the given constraints. Try drawing a rough layout of the product with a pencil. But do it at least 15 times. The first five you will find in the real world with some minor difference; they are actually inspired type products. The next 10 will be a stretch but once you are finished with those 10 you will see that there are not so many products resembling those 10 which you draw in last iterations.

Self-doubt is the greatest inhibitor of human’s limitation. Designers design but they don’t like their own creations and they go on presenting it to the potential client. The irony is that you are trying to convince someone of something which you yourself are not proud of. That’s why it is hard for most designers to convenience most of their clients during the presentation and meeting become an uphill battle. While delivering to the client it is necessary to deliver what they had demanded otherwise they will have a bad project with your name carved on it.