Using the Big Data Analytics to look beyond the Known-Knowns

Donald Rumsfeld, former US secretary of defense is the guy who recognized the three levels of the military intelligence known as: 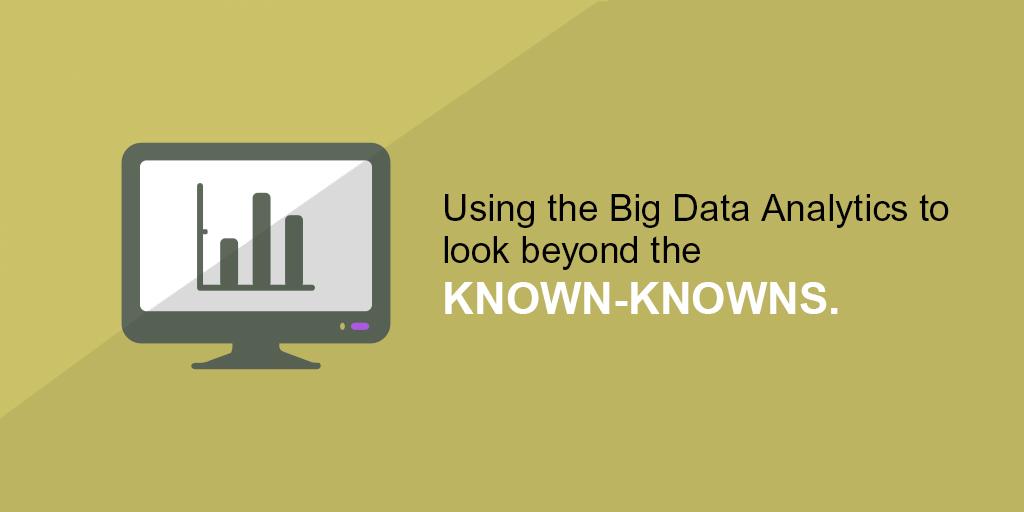 So, what are the actual limits of the big data analytics and why more and more organizations are not using this powerful tool to tap into the hidden powers of data and dare to see beyond the known-knowns of the business.

Knowing the known-knowns: The things we know – we know

Visualizing the larger and more complex data with the latest analytical techniques can help any organization gain the new insights on the consumer behavior and re-engineer broken process which can benefit both the organization and the customer.

In fact these Known-knowns form the foundation of the sound analysis which is described as the rational thoughts backed by the data and the insight.

Known-unknowns: The things we know but there are some things we don’t know

There is also lot of behaviors and pattern we know but are unable to explain them and this is why these known-unknown also comes under the dominion of the big data analytics. The Big data helps to answer the question why customers behave in a particular patter and what are the underlying reasons and factors which influence such behaviors.

This is essentially achieved by the studying and analyzing the large volume of data related to customer interaction and transactions which in time also unlocks the new paths to take certain specific actions and also helps in resolving the fuzzy and colliding situations. This leads to the flow of the number of solutions in favor of both the customer and the organization.

These unknown-unknowns are the biggest target of the big data analytics because studying the large volume of information may reveal such hidden patterns that no one ever thought would have existed in the first place. They make more sense after they have been discovered but were unknown to the business few days ago and no one thought that such a connection could even exist. Finding such connections, links and patterns is the main role of the big data analysis and this is what keeps the company ahead in competition.

There are certain facts that the company knows they exist but refuse to acknowledge. Advance data analysis not only helps in figuring out the unknown-knowns but also helps in finding the paths which leads to unfavorable outcomes for the customers and give the company a chance to protect its brand value from eroding in the market and among the customers.

There are many advantages in using the big data analytics and the advantages are bi directional. But in order to perform research this big large amounts of data needs to collect over the period of time which many organizations don’t do. As a result only 15% of fortune 500 companies are able to harness the power of the data analytics properly.