IPad Air: The Best iPad ever? A Fullestop Review

Sleeker and slimmer is something that the new generation expects from a gadget these days. When Steve Jobs revealed the iPad back in April 2010 he would never have realized that it would be such a success that in 2014 it will be market leader in the tablet domain. 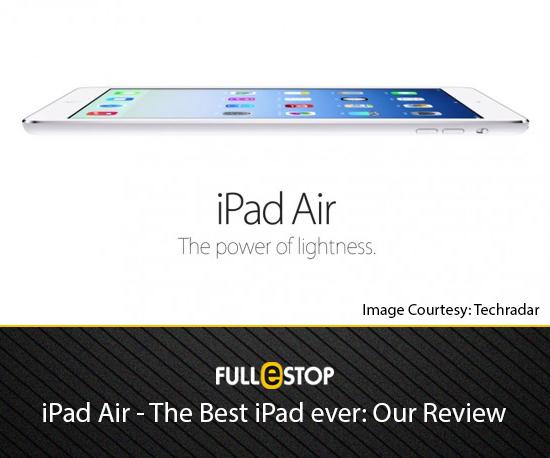 However, since then we are all spoiled for choice. Thinner gadgets are something that people expect today and as the years are passing gadgets are shrinking in size. However, apart from being sleek and slim in but there are a couple of great features to look for in iPad Air.

The new iPad Air has 43% thinner bezel than any other tablet. It is also quite light in weight and therefore perfectly matches to the name ‘Air’. The weight of the device is anywhere between 469 and 478 grams. The weight depends on whether you are purchasing onewith a cellular radio or not. As compared to than previous generations of iPad, this tablet weighs 28% lesser. The device comes with an amazing 9.7 inch retina display and blends perfectly with the thin aluminium case. The aluminium case is another reason for the device to be extremely light in weight. The device gets it power from an Apple A7 chip and supported ably by a secondary M7 motion co-processor. The A7 chip is the fastest processor Apple has even made and it also sports in the iPhone 5S. The idea behind the M7 motion co-processor is collect sensor data from the integrated compasses, accelerometers and gyro. Astonishingly, this tablet comes with a long lasting battery life as compared to the previous versions. In spite of surfing the internet, watching videos, clicking pictures or listening to music the battery of the device lasts for up to 10 hours. The device is easier to hold and carry. In fact, it is much thinner than the other popular tablets. As compared to amongst apple’s one of the phones; iPhone 5s, the iPad Air is one tenth in millimeter. The fit and finish of this tablet go unmatched.

The Apple iPad Air is better in comparison to any other iPad made by Apple so far. The design, interface, looks and features are simply perfect. The screen of iPad Air has 2,048 x 1,536 IPS panel. It also comes with 264 pixels per inch. For protection the screen has an oleophobic protective glass, which makes it scratch resistant. The colors are vibrant, crisp and clear. However the resolution might seem to be the same as any other IPads. It is just that when you take the screen few inches away from view you will still see the fonts and images clearly. Browsing the internet is very much convenient given to the 4:3 aspect ratio.The tablet is one of the best for multitasking. You can keep bouncing between apps and simultaneously perform other activities as well. The iPad Air comes with much more comprehensive software allowing the user with easy functionality. The iPad Air sports a LTE chip that brings in the power of the next gen 4G to the machine. This means that the iPad Air can support LTE bands by different carriers to leverage the unimaginable 45-50 MBPS speeds. 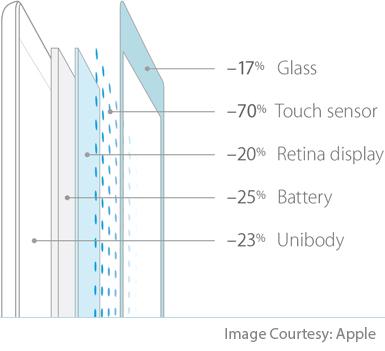 When it comes to sound quality, the iPad Air is reasonably good, all though nothing much to be surprised about. The stereo speakers are a step ahead of the ones used in iPad 4. However the stereo quality is not much impressive. This is due to the location of the speakers. The speakers are placed next to each other at the very bottom of the tablet. The audio is much better than the previous iPads, it is crisp and clear without any deviation and distortion. The mite more bass gives recorded sounds more depth and accuracy. Overall the speakers are loud enough and one can sit and watch a movie with company around. But you might need to purchase a separate speaker set up if you wish to listen to music. Talking about the overall sound quality of the iPad Air, there is no element of greatness in it.

The bottom line is, if you are someone who is stuck in two minds whether to buy or not to buy the iPadAir, and then here is a quick, unbiased judgment on the same. If you are a person who loves multi tasking or are someone who is a fan of iPad apps, then this tablet is made for you. For those obsessed with clicking pictures this tablet might come as a setback. The 5mega pixel camera is good, but not the best. The picture quality is pretty much the same you can find on other tables. Again for music lovers the tablet can be a bit disappointing. So depending upon your usability you may choose this phone.

Considering its premium price point it would be only fair to say that Apple will be have to dig in deep in the pockets of the consumers to make the iPad a success. Well nonetheless the Apple loyalist no matter what will buy its products at any costs because to quote it simply “It’s Apple, You Got to have it”. The iPad Air also fairs well the competition as it leads the number in 2014 for the best tablet in the market.

Only time will tell whether Apple would be able to sustain its leadership in the tablet sector in the future or not but at the moment its running away with the price with the iPad Air.