Orchestration not Federation is the requirement of the Big Data Analytics

Big Data and Big Data Analytics has lately been a hype. Too much Teradata is evolving at a fast pace and many of the industry trends are bringing about this change. So, today let’sgo around some of the most crucial and intensive facts that have hardly been scratched before but demands as much attention as any other term in “Big Data” sphere. 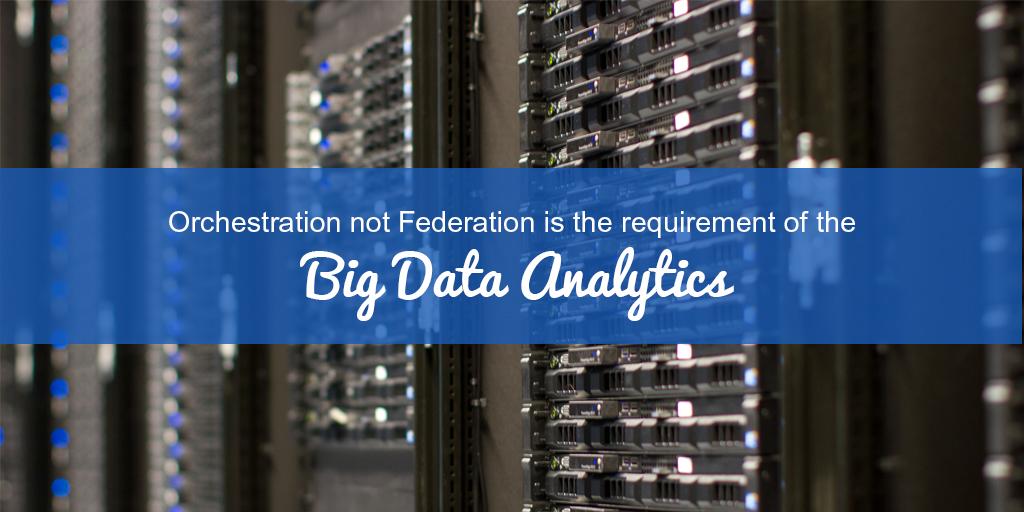 Advantages of analyzing the BigData, the evolution of analytical ecosystem and how big organizations are fitting into this!

Data has increased tremendously over the past few years that there is no single technology that can do everything and this calls for the need of cohesive ecosystem which is capable of analyzing the different file systems and brings the Hadoop technology in sync with the data discovery and the data warehousing and the challenge lies in tackling the complexity of the system. But, with some recent announcements there is a possibility of reducing the complexity and this is all possible due to the introduction of the QueryGrid. QueryGrid offers the cohesive system which is needed right now and the users don’t have to know where the data is physically sitting in the network. In short all the heavy lifting is done by the QueryGrid. Today’s market is already attracted towards the data analytics and with the introduction of the QueryGrid, it is becoming easier by the minute.

Making the different parts work together: The birth of the Orchestration

In the absence of such single technology our best bet is to make the different parts work together and this is what we call orchestration in the field of the big data. As of right now our best bet is to leverage the power of each individual system and make the best of their powers for the analytics. It’s like using the power of one system and passing down the result to the other system and then to the third and perform the required task.

With all the investments in the Big Data there is always a new name which claims to solve all the problems which one has to face with respect to analyzing the big data. But, the actual challenge is in creating the awareness around how the ecosystem works together versus the confusion of single system solving all the problems. And gracefully the market is had developed the maturity around this issue and knows that such claims are baseless and every component in the ecosystem has its important role to play.

Also, with the introduction of the data integration service companies are now able to better understand where they are required to do their data integration whether it is the open source Hadoop or some private player.

Data-lake is the promising and emerging architectural pattern but as of now not everybody is using them. Right now the problem with the data lake is that the more data you will put the more it will disappear because Hadoop as architecture so far has not been so successful in managing the metadata. It’s like pouring the glass of water into the lake and the minute you pour the water it is gone and you cannot create the same glass of water again.

Big Data is a promising and developing field and with the technologies emerging and the ecosystems developing it is becoming more promising and yielding results never seen before. But, for now the challenge is in bringing the different technologies to work together and have a successful orchestration to produce results which can be beneficial to both the customers and the organizations.