The mobile world recently witnessed two major releases viz. the Android 5.0 Lollipop and the Apple iOS8. Though, the two giants have always been luring consumers through these updates, a significant difference can be envisioned in their approach to these releases and their comparative success. The following paragraphs will provide a more detailed discussion. 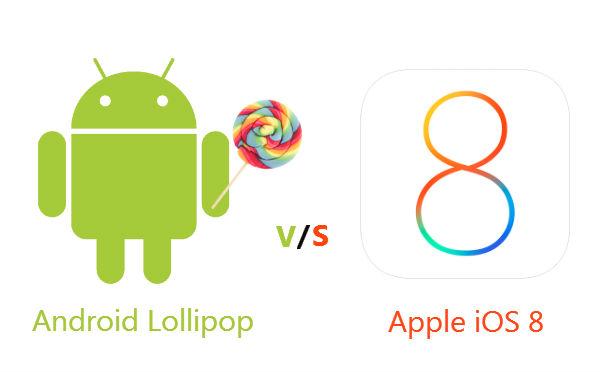 Android Lollipop is barely a blip, while iOS 8 is making gains

Google began pushing its newest version of Android a couple of weeks ago, still it hasn’t reached too many mobile device owners. On the other hand, the latest version of iOS passed a significant milestone in November end. This difference in success rate of the two operating systems is because of the approaches taken by their respective companies: Google and Apple when it comes to updates.

Google regularly provides status updates about the breakdown of Android versions that are actively being used in the market. This information is usually meant to help the developers, but it is also a good source for the rest of us to gain an insight into the product. Latest statistics show that Android 5.0 Lollipop has reached only 0.1% of Android devices so far. Motorola’s Nexus 6 and HTC’s Nexus 9 come with Lollipop preinstalled on them. Nexus 6 is hard to come by. The stock of smartphone has been limited since its launch, although it’s not clear how many have reached customers by now.

According to the latest statistics, most of the Android devices are running on older versions of Android. For example, Android 4.4 KitKat is installed on about 33.9% of all devices; quite a remarkable figure. The major volume goes to the Android versions 4.1 to 4.3 (Jelly Bean) that is running on about 48.7% of the Android devices. Android 4.0 (Ice Cream Sandwich) is running on about 7.8% of devices. You won’t see Android 3.x Honeycomb anywhere. Although, you will still find Android 2.3 (Gingerbread) running on 9.1% of the devices, and Android 2.2 Froyo on 0.5% .

However, the most important records on Android do not relate to the operating system version number. Instead, what needs to be noted here is that nearly all Android devices running on version number 2.3 and up are updated to Play Services 6.1. Google uses Play Services to add new features or functionality to the older versions of Android and it does not require the OS itself to be updated. Google began rolling out its Play Services 6.1 last week and it typically takes less than two weeks for the newer version to reach most of the Android devices in use.

Apple’s approach to update is entirely different. It releases its new versions to almost all users in one go. Apple released iOS 8 on 19th September and since this release, iPhone and iPad device users have installed it at a comparatively slower rate than last year’s iOS 7. This suggests that iOS 8 reached to about 60% of all in-use iOS devices and about 35% of iPhone and iPad devices are still running on iOS 7, and the remaining 5% are running on even older versions.

Both Lollipop and iOS8 are significant upgrades. While most of the benefits for the operating systems are aimed at developers, they also offer plenty of user-oriented improvements that make them even more compelling updates.