The biggest design trend of 2014 is surely the new ghost buttons, which is one of the smallest design components of a website yet worthy to talk about. So, what are these ghost buttons? And why they are named so?

Ghost button constitutes a basic shape (like rectangle, square or circle) with a transparent background that is outlined with a solid thin border. The main reason why they are called as “ghost” buttons is their ability to perfectly blend into the composition, thus making them hard to distinguish just like a ghost. However, if they are embedded with a proper background, they can achieve a completely opposite effect, becoming the ultimate point of attraction.

These buttons are quite different from the usual buttons and are located at noticeable positions on the website, like the center of the screen.

You can find these buttons on a number of websites and mobile applications, but usually these are associated with single page websites or the ones with flat design schemes. The use of these buttons is getting quite popular on web-pages that portray full-screen photographic images, as these buttons don’t intrude into the image like the traditional buttons.

The common elements of designing for ghost buttons are given below. Although this set doesn’t constitute all the elements, these are among the most notable rules and thus, worthy to mention here. 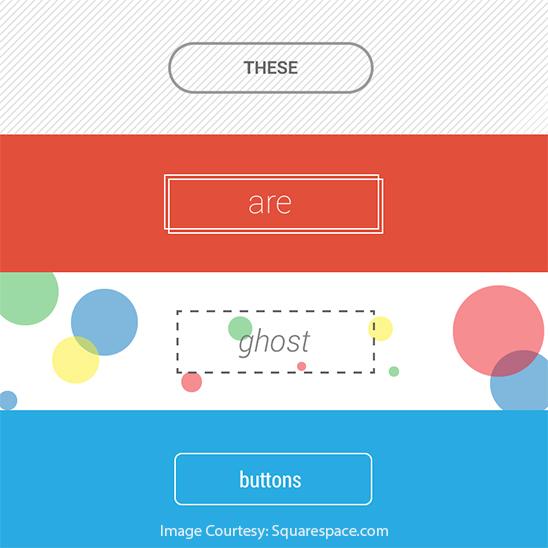 There are numerous benefits of incorporating ghost buttons on the website.

Ghost buttons are actually continuing the evolution of the flat design trend of 2013, but the key to any trend is to use it thoughtfully rather than blindly following it.

As a rule, designers should not simply embed ghost buttons into an interface and leave them as such; they should strengthen them with soft typography, thin outlines and solid backgrounds. This adds an element of creativity to the ghost buttons and makes them an essential part of the overall design of the webpage.

As such, these buttons make the design look more delicate and sophisticated, but require to be incorporated carefully.