The overly styled websites with all the spellbinding effects and adornments of colorful and glossy elements are failing to attract the present market-savvy customers. Instead, the concept of flat designs is growing at a fast rate. 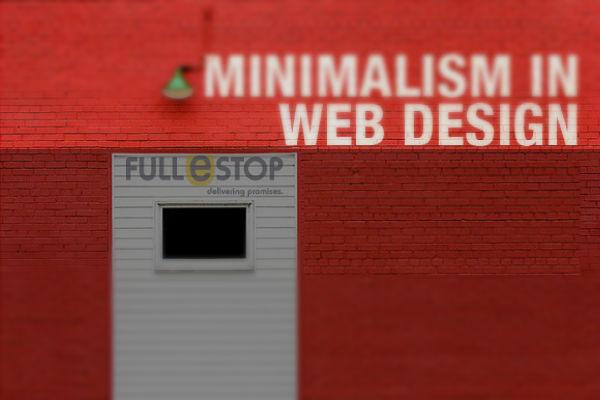 Minimalism is quite of a trend these days that has only been getting trendier. However, it has to be done in a balanced way or it may turn out to be dull. The best technique is to remove the shadows, fancy fonts, multiple colors, and any gaudy effects, etc.

There are reasons as to why flat designs are gaining immense popularity, and this is because they are crisp, and they are elegant and they are stylishly fashionable.

A minimal design focus on drawing the user’s attention to a specific element that’s supposed to draw maximum attention rather than pulling the attention in all directions.

Minimalism too has its roots in print design just like any other trend in web design. As per the experts, the biggest inspiration comes from none other than the Swiss style of designing being exercised in the 40’s and 50’s.

They didn’t depend on flashy or shadowy effects; and the use of colors was done in the most subtle manner. Apart from this, the font style was mostly sans-serif or Helvetica.

While the trend typically has its roots in the 20’s, the real popularity grew after three decades. This goes equally for flat design. It’s only when the multinational corporations like Apple adopted this style of design that it started growing popular with the rest of the world.

Minimalism in the Digital Realm

It really doesn’t matter how big strides we are taking towards the future, history has an ability to catch up. Flat design, which typically started in the 20’s, and rose to fame in the 50’s, is making a serious mark in the modern digital age. Going by an ever-increasing popularity, the flat design trend is definitely here to stay for long; and giants like Microsoft and Apple have certainly been the biggest contributors to this growing popularity.

Apple’s iPod was released with sleek lines and mostly subtle textures. Microsoft released the Zune media player and it did not have any overwhelming visual effects as associated with the Windows media player. Also, the typography was simple and colors minimal.

In fact, Windows Phone 7 was launched with the same characteristics. The layout was kept pretty direct and sans-serif font style icons were used. And then, the design was called Metro. Based on the feedback that this design got from all the quarters, the company decided to stick with it. Even it’s stamp can be viewed all over Windows 8 OS. In fact, any of the products from Microsoft is kept stylized in a grid-structure now along with subtle colors and sans-serif font styles.

Apple’s designs were dictated by skeuomorphism until they decided to drop it for a flat way of designing things. Skeuomorphism seemed outdated at this point and when Apple released their iOS back in 2013, they made it quite evident that they were also moving towards minimalism. Apple has managed to move past its competition because its aesthetics have always been more exquisite, fashionable and trendy.

So, what this uproar is all about?

If visual appeal is the only reason why flat design has gained this popularity till date, the discussion can be stopped outright. But maybe this is not all of it.

As an important fact, responsiveness has been a head-turner in the world of web. Your website needs to be responsive across different devices and platforms or else you’ll not get a good amount of quality traffic. The lack of responsiveness can make you lose your loyal visitors. For website owners that have continuous, relevant and ever-increasing traffic on their goal list, responsiveness is one of the prime necessities, and this is where minimalism proves to be an even more vital side.

For how long minimalism will keep dictating the trends?

It’s neither possible nor practical to predict this, as new web design trends will keep coming and they may possibly replace the flat design as well. Until then, we can just revel in and make the most of what we have right now.