PS4 and the XBOX 1 have taken over the next generation of gamers. Both Sony and Microsoft claim that they have powered the next decade of gamers, but many are still confused which one to choose between the both. Since their release in 2013, millions have purchased the XBOZ one and Sony PS4. On the terms of sales both seem to be running on the same track. But are they truly that empowered? Do they meet the expectations of gamers? Is either of the one better than the other? To help answer all these questions, here is a Fullestop review on both the gaming consoles.

The review is based on the various aspects of the gaming consoles.p

Which one scores better on Design?

Let us first start with evaluating Xbox One. The dimensions that measure up to 13.5 inches x 3.2 inches make the Xbox one a beast in gaming. The console comes with lots of vents so as to avoid it from overheating. The robust design makes the XBOZ tower over every other device that you must be having. Microsoft cautions its users from standing it vertically. 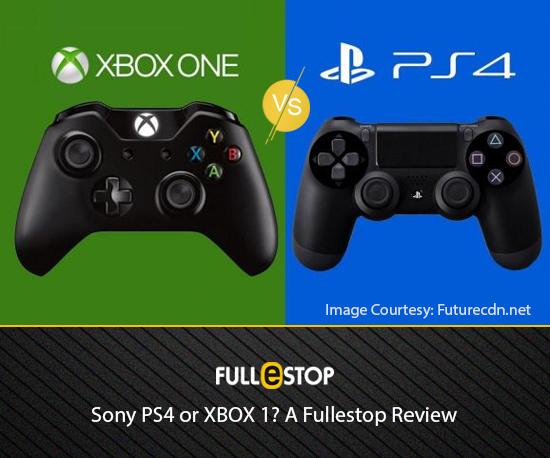 The PS4 on the other hand comes with a dimension of 10.8 inches x 12 inches. It has more of an angular shape and is very much stylish in design. Its design suits most of the media cabinet which lacks in XBOX one. Also the PS4 is much lighter in weight that is 2.75 Kg. The Xbox is quite heavy and weighs up to 3.56 Kg. Another advantage the PS4 design has is its hiding ports. However, it can be difficult to plug cables smoothly in the back of the system. When it comes to designing the PS4 obviously scores some brownie points over the XBOX.

The front and rear ports

Ps4 has gigabit Ethernet and 802.11 Wi-Fi bands b/g/n. XBOX includes 802.11a band (the older one) and plus the other that the PS4 has. Both the 2.4GHz and newer 5GHz channels are supported by Xbox One which are dual band routers compatible. PS4 has limited its connections to 2.4GHz, which can cause more interference. Both consoles have a 500GB hard drive. But it is only PS4 which allows for replaceable internal drives. However XBOX one allows its users to add external storage. Both the consoles have some kind of remarkable features. The XBOX has Blu-Ray / DVD combo drive. At the rear there are two USB ports. To lug the system around LAN parties it has a K-lock at the far end of the device. 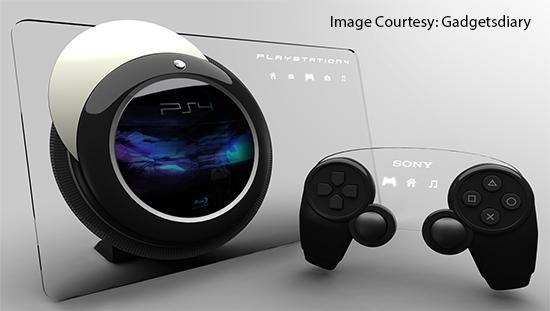 When it comes to the Sony PS4, its approach remains minimalistic on the rear ports. There is only an HDMI out, S/PDIF, Ethernet and PS4 camera port which is marked as “AUX” at the back of the console. When it comes to rear ports the XBOX one has more features over the PS4. The XBOX one has HDMI in and IR blaster connections. Ps4 however, sticks only to gaming as its first priority.

Which one is the most powerful?

Xbox One has a 1.75GHz AMD 8-core CPU, which is much better than its earlier 1.6GHz processor in PS3.The PS4 has CPU 1.6GHz processor and AMD 8-core with x86 based architecture. The PS4 clocks at 1.84 teraflops whereas the XBOX speeds at 1.31 teraflops. When it comes to graphic processing, the PS4 takes the center stage with faster rendering compared to the XBOX one. Overall, both the designs are quite powerful and give the user a strong experience of gaming. The devices have exceptionally exceeded the expectations of their previous versions. 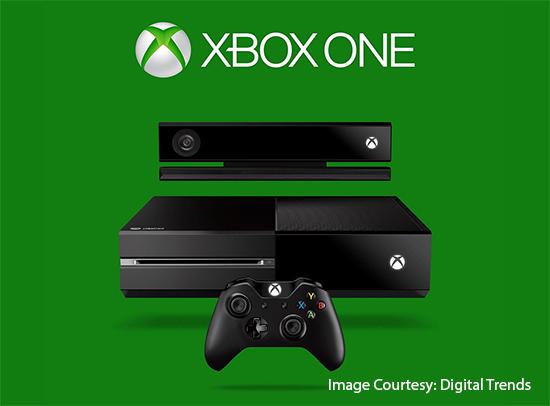 Conclusion: It would be wrong to say which one is better than the other since both the devices are truly brilliant master pieces. If you are confused between choosing one of the two then try to figure out what you want more from the device with the comparisons given above. Both the devices are well equipped to give a powerful gaming experience. When it comes to pricing of the consoles, you need to be ready to shed a few extra bucks from your pocket. If you have been using the previous versions then expect the prices of these to be more than those.