Will consumers ever buy through Social media?

In this digital world, every human keeps himself online for most part of his day, browsing, shopping or going social via social networking sites. Shopping online and living social life online has become a part of their daily routine. Social media has now been engaged in high-profile testing to bring the experience of shopping directly into social streams like Twitter and Facebook.

Already there are ways to plug e-commerce from the social media environment; links in social posts are driving users to main e-commerce site. And now, Twitter and Facebook are working on features to make the shopping experience more direct and smooth. Social media is now experimenting with a Buy button so as to allow their consumers to make purchases directly with a click without leaving the social network. 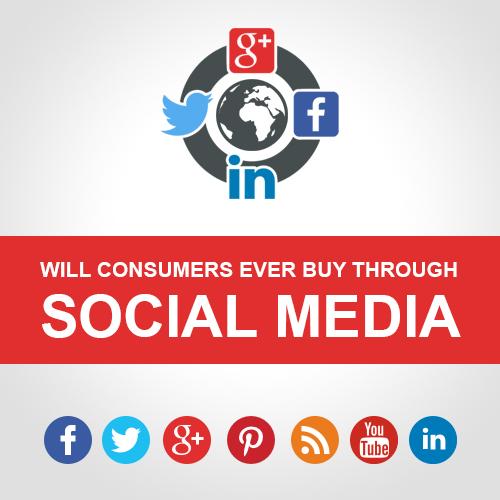 Now the big question that comes to light is: How many people want to buy from the place where they gets connected with friends? How many of them are willing to pause to tap “Buy” while scrolling through social life around them?

The company’s first effort was to give users a power to make purchases with a Twitter-synced American Express card and can tweet with a specific hashtag for example #BuyXController.

It wasn’t a smooth experience. After the hashtag tweet, user receives a confirmation tweet from American Express, and to sign the deal, user had to respond within 15 minutes that is have to tweet back in response. However, because of that clumsiness, the feature never gained attraction.

Twitter is working hard on its native solution before a full-scale launch by testing its Buy button while working with some of the e-commerce platforms such as Gumroad, Music Today Stripe and Fancy and a selected artist, brands and non-profit organizations. It works as, as anyone sees Buy button and clicks on it, user is prompted to fill credit card information and a shipping address. The transaction can be completed with two more clicks, one to confirm the order is included.

In November, it launched another similar test. Within promoted tweet advertisers, provided was a way to offer virtual coupons. The offers are loaded directly to consumers’ debit or credit cards and are automatically used when purchases are made. This type of scarcity and exclusivity offered represents a perfect tapping into social commerce.

People are tweeting about services and items, but still there’s a big difference in tweeting and actually making purchases.

If Facebook is moving more slowly, it’s because the efforts social network putting in this area have been marked by splashy failures.

The most big-league example: the Facebook store program that was launched in 2011. J.C. Penney, Nordstrom, GameStop and the Gap opened and closed Facebook stores in a period of one year; complaining about enough ROI and that proved shopping destination on Facebook to be redundant.

There is another attempt at direct sales started in September 2012. Way for people to send trinkets to friends, it dropped physical products system from the program last year and focused on selling gift cards to companies such as Target and Starbucks. By the August it shut Gifts down entirely.</

Many analysts still doubt that Twitter and Facebook will be major e-commerce players. General thinking to go on these social sites are the reasons other then shopping. Pinterest, on the other side, doesn’t face that perception; flocks to the social booking website go to explore about product that might interest them to make a purchase. Pinterest isn’t currently bother about Buy button; its Rich Pin feature give alert pin to its users and shows price and availability of products from E-Commerce sites.

There might be opportunities for scales of products with short shelf lives like movie or concert tickets. And what we are saying is well there may be promise with these search engines. None of them have proven anything; none of retailers are telling us a different story.

So the story hasn’t actually changed. The thing that’s changed is that search engines exist and there are new products which are more potentially different than Facebook Buy button.

In simple words, social media’s affair status with e-commerce remains an unsatisfying but still there hope that we’ll see more clear picture in near future.